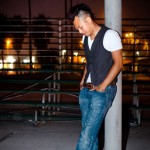 Former student of Vince Kelvin and Johnny Wolf from the ABCs of Attraction.

From his PUA Training bio:

The Asian PUA grew up in the typical Asian household. He was taught to be diplomatic, polite, and not to rock the boat. Those are definitely good qualities to have, but it also negatively affected his life as he grew up. The Asian PUA was the nerdy kid at school, getting teased and pushed around every day. In fact, it was so bad that he finished high school two years early just so he can leave for college and stop the daily torment.